SYMBOLS OF THE VILLAGE 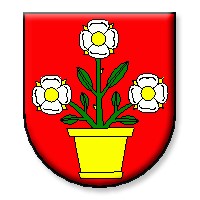 Coat of arms, flag and seal represent the most significant identifiers of the village. Generally, there are strict traditional rules to create symbols which have been in place for centuries. Ivanovce village had to also follow these rules when creating its own identifiers. The symbolism of rose with leafs in a circle represents the Sun, deity, perfection and eternity of life …

Plant motif is visible in all village´s seals where the oldest is dated to 1774. Most commonly, roses are perceived as the symbol of love and the charm of youth. Originally, in ancient Greece a rose flower was of white colour and was dedicated to Aphrodite, the Goddess of Love. Once, she was running to meet her lover Adonis when she stung on thorn and her blood coloured the rose in red. Since that time, red rose is a typical symbol of love.

It is obvious that such symbolism could be seen in any coat of arms that contains three-rose flower. However, the Ivanovce village´s one is specific due to addition of flower pot into that highlights an increased care of the three-rose flower, its cultivation and legacy preservation.

The Flag of Ivanovce village consists of four oblong stripes in red, white, green and yellow colour. Ratio of the flag is 2:3 and it ends with three pointy spikes.

The Seal of Ivanovce village has round shape design with diameter of 35 mm and includes the official text “IVANOVCE VILLAGE”.